BLOG / Uncategorized / Native Mobile Apps: One Platform or All Platforms?

“There’s an app for that!” is something we’ve all laughed about at some point. It’s a funny look at the reality of mobile apps and the flood of ideas that get turned into them. 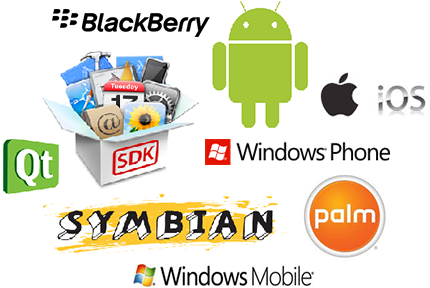 And brands have swarmed to mobile apps just like everybody else.

But is it really wise to build native apps? Ideally, brands would invest in building apps for a single platform or maybe two, if their target market makes use of both in fairly big enough numbers. Oddly enough, we’ve seen numerous brands pump money into every platform in the hope of capturing the biggest audience possible. But as with maintaining multiple social media presence, it will only be one that usually gets the most focus while the rest just rot away. We need to stop looking at apps, social media profiles, websites and other digital activities as “campaigns” or “activations”. We need to begin considering these investments as something long-term, giving us the ability to capture the right audience, build meaningful relationships and make them grow over the years to come. We’re not implying to not do campaigns or one-off activations. Do so, by all means, and give us a call if you need any help! What we are saying though is not to splash your money around, leaving your investments to rot. If you agree with this ideology, you’d probably be the sort of brand that would build an app for a single platform, pay attention to user feedback and release updates for it over several months or years.

Essentially, we’re talking about building a web-based mobile app  that caters exclusively to mobile devices. Neither are we talking about a responsive website nor a mobile website. The fundamental difference here is that a web-based mobile app is built to be an app. Its menus, functionality, content and purpose are all built to look and feel like those found in native mobile apps. New technologies allow us to accomplish this. JavaScript has been around for ages but new frameworks have been developed, allowing us to replicate native functionality without causing performance issue and requiring massive downloads. It’s quite exciting if you think about the possibilities.

Using these technologies, your users would be able to access your mobile app by simply navigating to a given URL (e.g. myawesomemobileapp.com). The app would load within seconds, presenting the user with the usual functions they would expect from a native app – a menu, the ability to scroll down, etc. A quick “Save to Home Screen” is enough for a lovely icon saved for quick access in the future. As and when updates are released, the user simply needs to open the app. Voila! They have the latest version.

This approach does require that the user have a connection to the Internet. But here are a few arguments to debunk any concerns this may bring up:

A crucial thing to consider is that users get bored very quickly. An app that does one thing and one thing only gets old very quickly. Apps that download content infrequently get old very quickly. If you have got to survive in app stores, you’re going to need to actively and consistently build on your initial investments – until they no longer make sense, of course.

However, if you were to build your mobile app using the technologies we had spoken about earlier, not only will you be able to cater to all platforms through a single app but also release updates quickly, easily and more cost-efficiently. Imagine being able to change an interface the second a new campaign or product launches. Imagine not being restricted to the rules the motherships impose (i.e. Apple and Google). There are limitations to this approach – such as the inability to access some of the device’s core functionalities – but for most brands, what we’re talking about solves a lot of issues with how things are today.

With over a decade of development experience, we have the expertise and experience to support your brands on mobile. Get in touch today and have a chat with our Head of Mobile Innovation for more information about the technologies we’ve discussed here and how we can get your brand on all devices today.