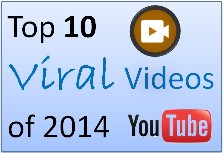 1. The 71st Golden Globe Awards has plenty of glitz, glamour and Hollywood drama. For those of you who missed the live telecast, and the highlights later on, Digg has managed to put together a collection of clippings from the night. The 90 second video is hilarious and garnered more than 60 thousand views.

2. Li Na won her first singles Australian Open Tennis title this year. What really caught the public’s attention with more than a million viewers was her hilarious after-award speech where she thanked her agent for making her rich and said her husband is lucky that he found her.

3. Frisbee master Brodie Smith travels to Dubai for his latest video of trick shots. He performs his infamous tricks in the shadow of the Burk Khalifa, on a camel and on the water. He even takes a Frisbee shot on a parachute over the desert and on the Wild Wadi water park.

4. In March, it was the turn of the Oscars to steal the show. This year’s host Ellen Degeneres put together a behind-the-scenes peek at what goes on behind the screen. Ellen takes us on a frequently witty, sometimes touching, and always entertaining journey into the backstage world of the Oscars.

5. The premier basketball league in the United States and Canada, NBA, takes itself very seriously. But the players apparently do not, at least not off the court, as witnessed by this hilarious video. More than a million viewers tuned in to see their favourite players goof it up.

6. Burj Khalifa, the tallest building in the world, is the hero in this video along with French daredevil base jumpers, Fred Fugen and Vince Reffet. More than 4 million people have viewed their amazing jump off the Burj Khalifa Pinnacle.

This list is totally random and just our opinion of what constitutes the best viral videos on 2014. These might be more out there that are even more awesome; it is just that we have not seen it yet. If you have videos that you feel should be on this list, send us the link, and we will put it on out next list.

Need a viral video for your brand?

Don’t delay…We are one of the leading Digital Media and SEO Agencies based in Dubai offering comprehensive web solutions for our client.  Give a shout or drop a line and we can get one right from concept to production.