No conversation about the UAE is ever complete without talking about the incredible changes that the country has gone through over the last few decades. In recent years, the rate of this transformation has only sped up. We now see an even greater emphasis on technology, global trade and tourism in the nation’s administrative policies and international relationships. UAE is emerging as a global power with an increasing say and influence in world affairs.

As we step into 2021, we reflect on the way the nation’s population has grown more diverse and how its vibrant expatriate community (which makes up around 80% of the population) has had a profound impact on the country’s culture. We will also explore the many different demographics that make up the population and how each one of them will shape its future in the coming years.

When researching for this article, we came across many conflicting figures for the population of the UAE in 2021. We were looking at data from a host of different institutions, who had used their own systems and methodologies to arrive at their figures. In the end, we chose to accept the United Nations figures to be the most accurate, since their numbers seemed more aligned with the UAE government’s official figures from 2018.

We have listed out these different figures in the following table.

(In the coming weeks we will be exploring UAE’s 2021 population in detail, from the perspective of the various factors and demographics that it’s made up of.)

Meanwhile, you can read our 2018 blog examining the elements of last year’s population figures.

According to an estimate by the World Bank, the UAE’s population in 2018 stands at 9.543 million.

Other sources which confirm this estimate include populationpyramid.com and uae-expatriates.com, while Facebook Insights reveal that the potential reach of the platform in the UAE in the third quarter of 2017 was 9.3 million. We can safely assume that the population of the UAE in 2018 stands at around 9.54 million.

The Federal Competitiveness and Statistics Authority (FCSA) had published the that UAE population according to administrative records until 31 December 2016 was 9,121,167 (9.12 million).

Male vs Female Population of the UAE in 2018 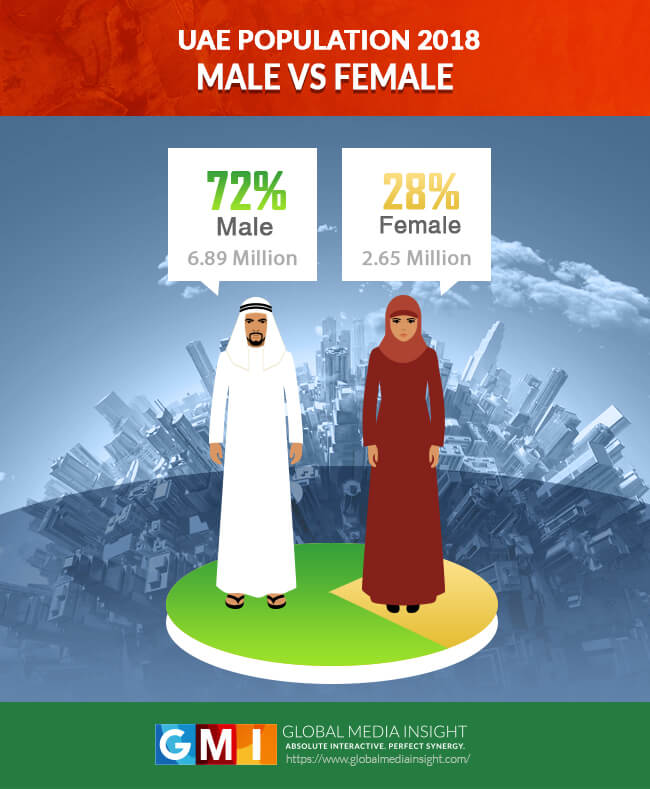 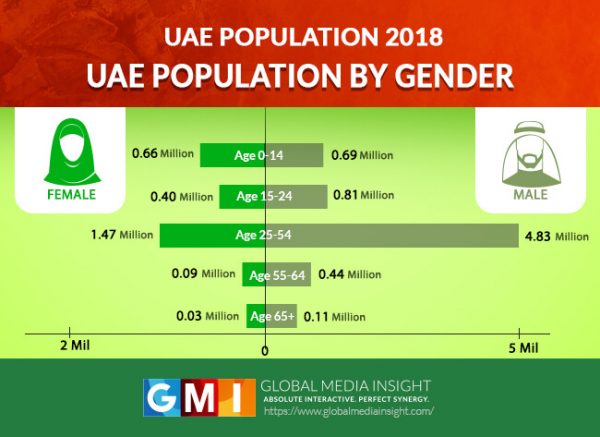 Demographics of the United Arab Emirates

The life expectancy in the UAE has been on a steady rise. The majority of the population falls into the 25-54 age bracket, again indicating that immigrants and expats make up a large chunk of UAE’s population.

Age-wise population of the UAE

Majority of the UAE population falls in the age group of 25 to 54 years. A large part of this can be attributed to the expatriate population of working men and women who fall in this age category. 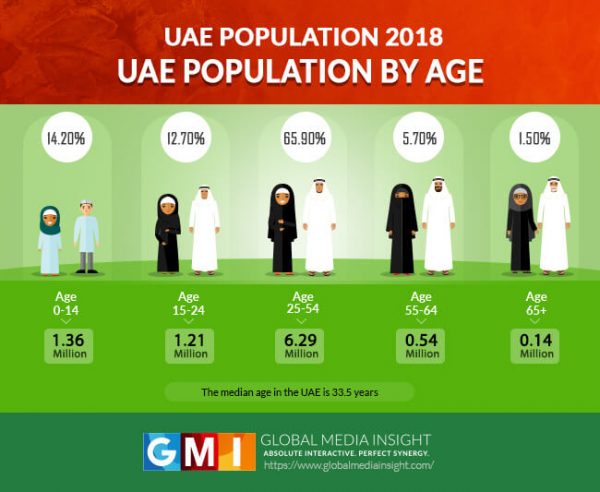 Age-wise Population of the UAE

Expatriate Population of the UAE in 2018

As stated previously in this article, expatriates and immigrants account for 88.52%. Emiratis make up remaining 11.48% of the population. 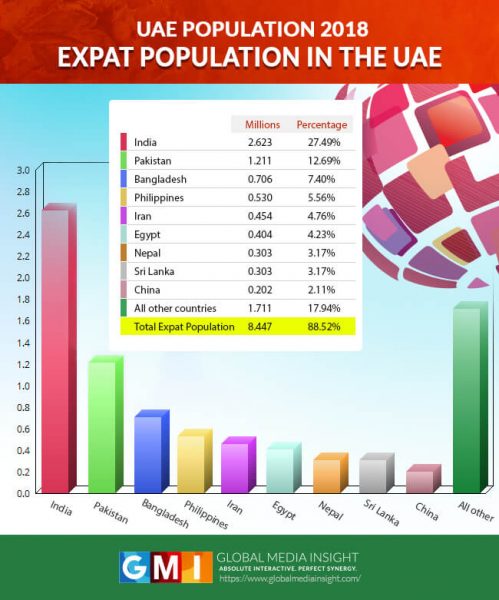 South Asians, which include people from India, Bangladesh, Pakistan and other South Asian nations, compose 59.48% of the population. The rest of population comprises of Egyptians at 4.23% and others at 17.94%. The UAE government’s population strategy envisions in making the Emiratis the majority community or at least bringing the numbers up to 40% by the year 2021. 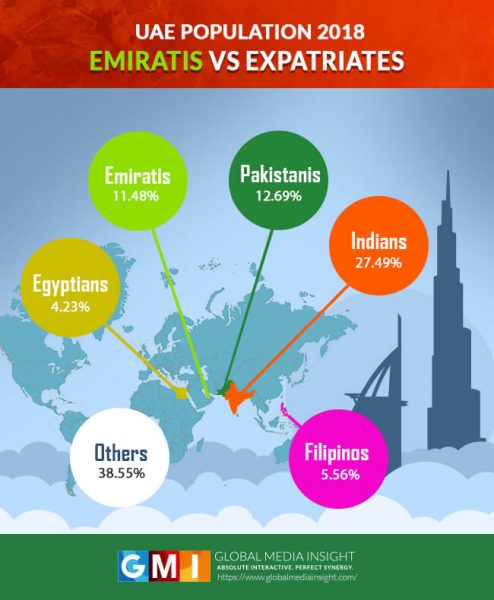 UAE Population by Nationality (Expat population of UAE in 2018 )

Digitization and Economic Status of the UAE

The UAE features among the top “adopter” economies in terms of connectivity within the Arab world according to Huawei’s Global Connectivity Index (GCI) 2017. The report analyzed 50 countries, of which 16 were considered as front-runners, 21 as adopters, while the remaining 13 as starters.
Front-runners mostly comprise of developed nations, Adopters have an average GDP per capita of $15,000 and starters are countries with an average GDP capita of $3,000. Adopters focused on increasing ICT demand and working towards digitization and economic growth.

Most popular Social Media Platforms in the UAE 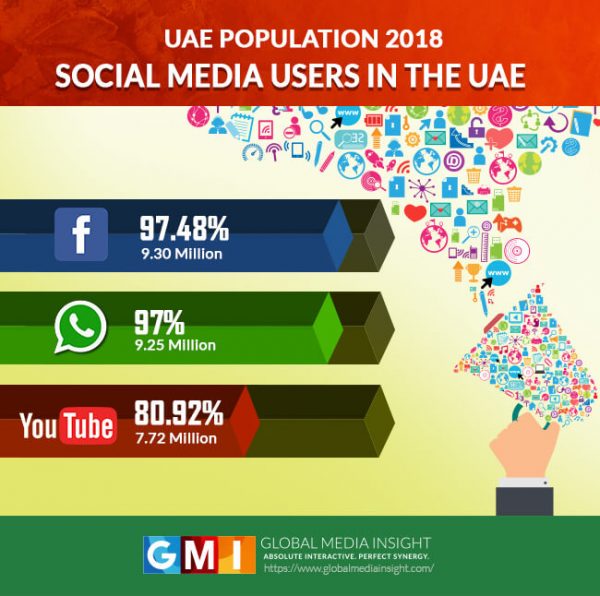 Facebook is the most popular social media in the UAE with 97.48% of population using the social media platform.

WhatsApp is the most popular messenger app in the UAE with 97% of people in UAE using WhatsApp.

YouTube users in the UAE have also increased compared to previous year. According to Adwords insights, 80.92% of the UAE population (7.72 million) uses YouTube.

Nearly 75% of the population of UAE is concentrated on the northeast of the country. The two biggest cities Dubai and Abu Dhabi have more than 3 million residents each. Dubai, with the busiest port in the region, is the commercial capital of the country. Some of the biggest companies in the world have their headquarters in the city. 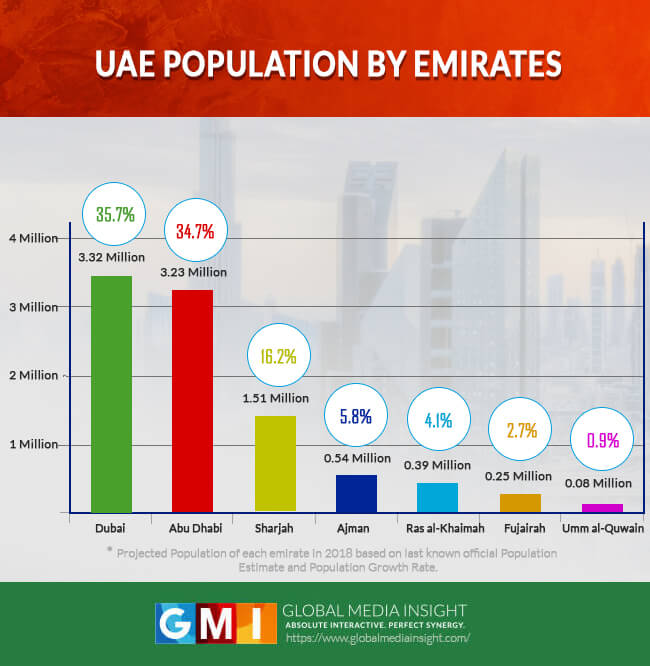 Abu Dhabi is the capital of the country. The city houses federal government offices and serves as the seat of the UAE Government. Nearly 95% of the oil and 92% of the gas in the country are in this Emirate, making it the wealthiest Emirate. When considering other entries in the list of city wise population distribution of UAE, Sharjah emerges a distant third from the big two with 1.51 million people. Sharjah’s close proximity to Dubai and much lower living costs can be attributed as reasons for its growth.

Population of Each Emirate in UAE (2018)

How We Arrived At These Figures

The emirate-wise population mentioned here is projected from the last known official population figures released by the UAE government. Several other factors, including the historical population growth rate available from official records as well as events in these emirates which might influence the observed population growth were taken into account before arriving at the final population of each emirate.

The UAE government has conducted 4 censuses since the very first one 1980. when the last census was done in 2005, Abu Dhabi was the emirate with the most population. Since then, Dubai has grown rapidly to become the most populated city in UAE. This is reflected in the latest estimates by the UAE government. The government arrives at these population figures from the citizen and immigration records that it maintains.

Refer below graphs to compare the population change in each emirate.

The oil boom of the 80s coincided with a massive population growth in Abu Dhabi between 1980 and 2005. The city’s population now shows a steady increase over the last decade, edging over 3 million in 2017. 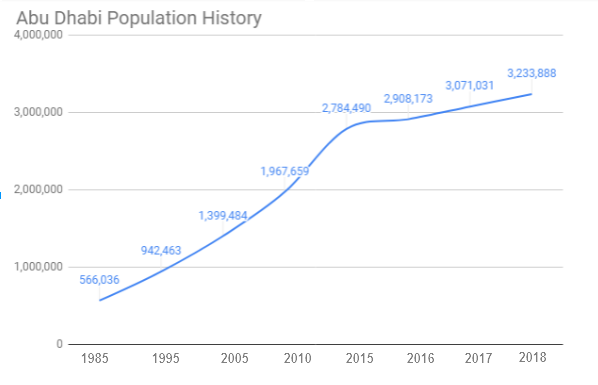 This global hub for transport and business continues to grow exponentially every year. The population of the city has nearly tripled in the last 20 years making it UAE’s most populous city in 2018. 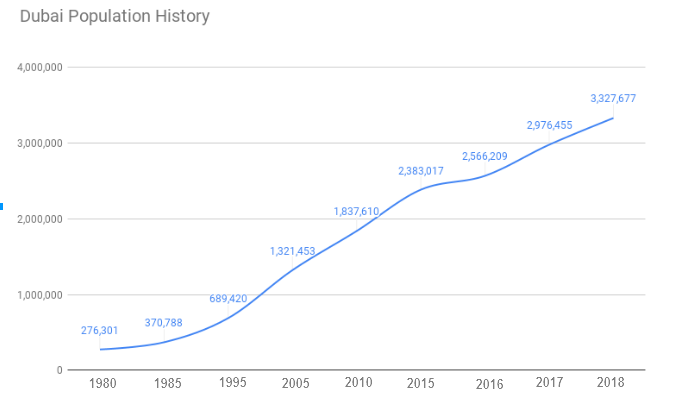 Even though it has a rich history that is more than 5000 years old, Sharjah is now considered an extension of Dubai. The city is part of the Sharjah-Ajman-Dubai urban zone. 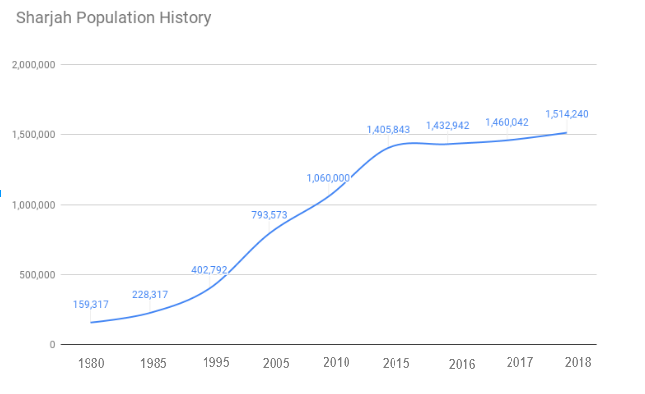 The Emirate of Ajman forms a contiguous urban area with the Emirates of Dubai and Sharjah. In the 1980s Ajman was a small town with a population under one hundred thousand . Now it has grown manifold into a big city with over five hundred thousand people. 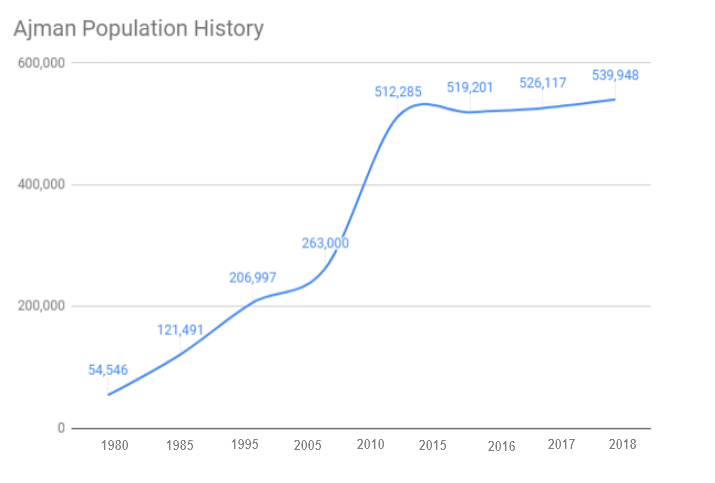 Known for its beaches, Hajar mountains and the Sheikh Zayed Mosque, the Emirate for Fujairah underwent a population explosion in the 90s. The population of the Emirate is mainly employed in the cement, stone crushing and mining industries. 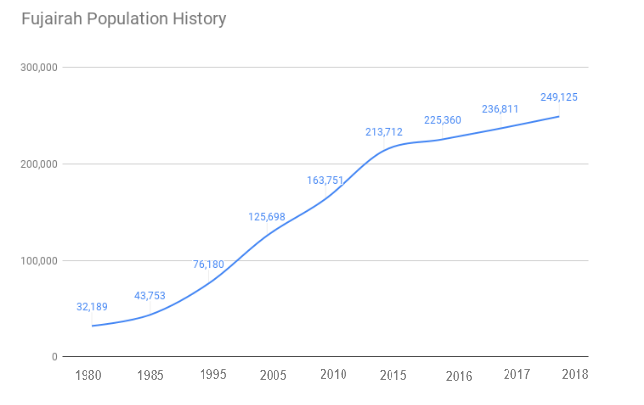 The northern-most Emirate of Ras Al Khaimah has a high percentage of Emirati citizens in their population. The main sources of employment in this Emirate are the cement industry and the agriculture sector. 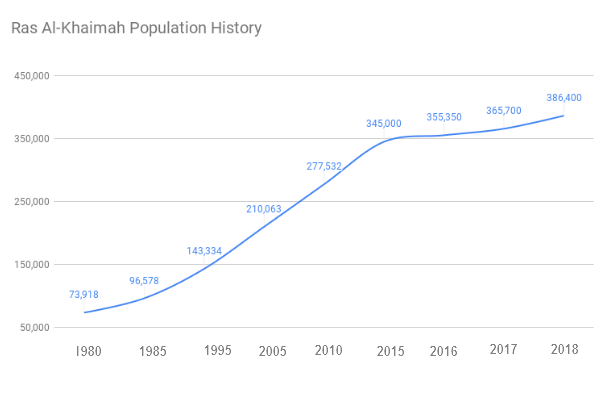 Located between Sharjah and Ras al-Khaimah, Umm al-Quwain has the lowest population among all the Emirates in the UAE. This is the only Emirate where women outnumber men. Fishing is the largest contributor to the economy of Umm al-Quwain. The islands around this Emirate make it a very important tourism destination. 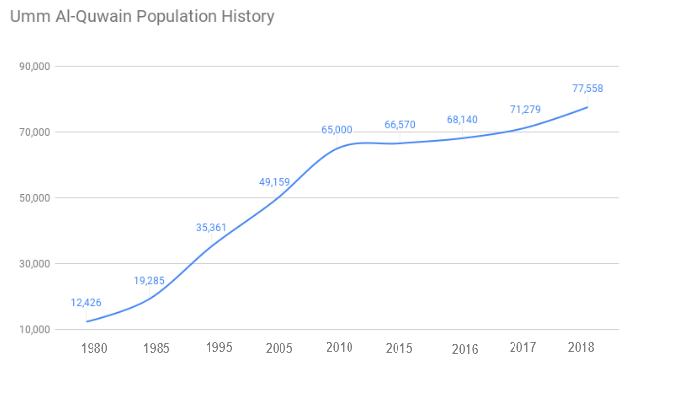 Over the years, the country has gone through several key demographic changes. The discovery of oil gave momentum to the economy of the country. Recently, the UAE government has also been promoting a tourism and knowledge-based economy to spur the economic momentum. Today, Dubai ranks among the most visited cities of the world, ranking 6th with 16 million visitors in 2017, as per thisisinsider.com.

The increase in the number of jobs across sectors led to an influx of workers at all levels of all nationalities. Within a span of a decade, the total population grew by about 5 million. This boom in population was largely due to the burgeoning expat and immigrant population. UAE has the world’s highest net migration rate, with nearly 88.52% of population composed of expatriates and immigrants.

This becomes even more apparent when we look at the fertility rate in the UAE. The average rate of babies born per fertile woman has been showing a downward trend for the past decade, and yet the population is soaring.

An in-depth analysis of the population of the UAE can help marketers formulate plans, goals and strategies to promote their brand. With more than 19 years of experience in the digital landscape of the Middle East, GMI has crafted the digital presence of some of the best brands in the region. We understand what it takes to tap into your target audience on various digital platforms. We can help ideate and weave a  digital strategy that works for your brand. Talk to our digital strategists  today and take your brand to the people you want to reach.