Who is the King? From Google’s perspective

People usually ask questions when they need to know something or when they are in a state of doubt. One of the most popular discussion was – ‘Who is the King’. 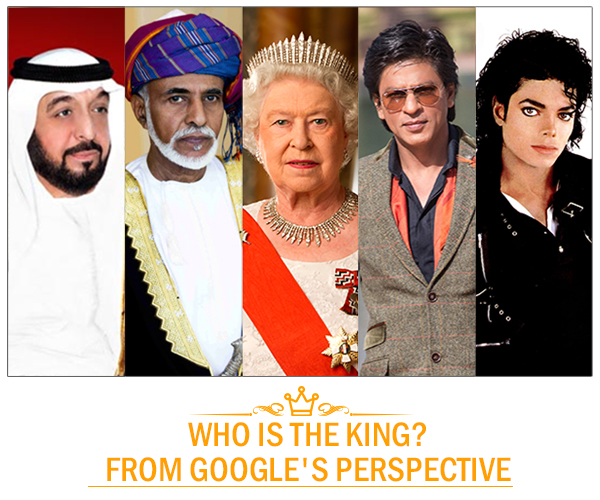 There is no one in the world, who answers so many queries like Google. Every day many of us ask Google a variety of questions. Google always answers. Many of us know some parents or teachers who sometimes get irritated and stop answering. But that’s not the way Google grew up in the last 16+ years. Google’s parents Larry Page & SergeyBrin, always trained Google to respond promptly. This training has had its results. Google also knows the Bible very well. The more you give, the more you get.

Thus although Google is only a teenager, many go to Google to get answers. Every minute, Google answers 2.4 Million queries. To understand this number just remember that Google answers 7.2 million queries in 3 minutes. Thus if you imagine, all people in UAE were to ask a query, Google can answer to all the queries of people in UAE in 3 days. That’s such an awesome pace to keep up when answering questions. In a day, Google answers a whopping 3.5 billion queries. Thus all the queries from a heavily populated country like India, which has a population of 1.25 Billion can be answered by Google in less than 7 hours. It will certainly take Google more time to answer all queries from China, as China has a higher population of 1.36 Billion.

Recently, some people in USA, checked out Google results for, “King of USA”. Google correctly pointed out the answer – Barack Obama. Although he is not the Monarch of USA, being the current president of USA, he’s the one who can best match for the question at this point of time.

Taking a cue from this, we asked Google a few questions. We did so, not because we did not know the answers. But only so that you don’t take the trouble to ask Google. Due to more reasons than are known to us, we feel, we need to take care of the work load of Google. Since we are a Dubai based digital agency which Googles taps into for recommendations on most relevant search results, we always do google a favor. Here are the queries relating to ‘Who is the King’ and the answers Google gave.

Who is the King of Fruits?
Google answered Durain, although we thought Mangoes would have been better.

Who is the King of Bollywood?
Google answered Shah Rukh Khan (As a ruler he is very young, turning 50 only on 2
nd Nov 2015).

Who is the King of Hollywood?
Google mentioned Tom Cruise or LeonardoDicaprio.

Who is the King of Pop?
Google says it’s Michael Jackson.

Who is King of Oman?
Sultan Qaboos, says Google.

Who is King of China?
Xi Jinping says Google.

Who is King of Vatican?
There weren’t any specific response that we got, but Pope Pius IX was known as a prisoner of Vatican.

Who is the King of Qatar?
Google’s answer – Sheikh Tamim.

King of France?
Here Google answered very matter of fact. Google mentioned if the throne was restored, Louis Alphonse would be King Louis XX of France.

The King of Jungles?
Google pointed to the movie with the same title.

All queries regarding King of Peace, King of Heaven & Earth, King of Glory, Google pointed to Jesus Christ.

Google goes through hundreds and thousands of search results to arrive at these answers. It is interesting to note that Google, in some instances create Knowledge Graphs; gathering information from diverse range of sources, towards providing semantic search results.

Give us a shout or drop us a line through our Contact Us page today!