The Kingdom of Saudi Arabia (KSA) is the heart of the Arab and Islamic worlds and is revered as the land of two holy mosques: Mecca and Medina. Mecca, as you know, is a pilgrimage center and where the sacred Kaaba is located. It is a custom among Muslims all over the world to face Kaaba while doing their prayers.

Saudi Arabia is the largest country in the Middle East and the 18th largest economy in the world. In his Vision 2030 statement, the Crown Prince Royal Highness Prince Mohammed bin Salman bin Abdulaziz envisions building Saudi Arabia as an investment powerhouse and a hub connecting the continents of Asia, Europe and Africa.

Thanks to its vibrant economy, the population of KSA continues to grow with the influx of expatriates from across the world. The population of Saudi Arabia in 2021 is 35.34 million according to the United Nations. This shows a growth of 1.50% from 2020’s 34.81 million figure.

Since 2021 Saudi Arabian population data is shown differently in different sources, here we go with the data provided by the United Nations.

If you’re interested in comparing data from all leading sources, check out the table below:

The life expectancy rate of Saudi Arabia is 75.69 years. Better living conditions and growing health consciousness have contributed to an increase in life expectancy rate by about 3 years over the last decade. The fertility rate of the kingdom is 2.27 births per woman. Saudi Arabia has an average of 1,586 births and 345 deaths per day, while the infant mortality rate is 5.3%. The median age in Saudi Arabia is 31.8 years. Around 70% of the population is below the age of 30.

Saudi Arabia Population by Nationality in 2021

More than a third of Saudi’s population is made up of expats. In 2021, the expat population is 13.49 million. The population of Saudi Arabia including expats is more than 35 million. The expat population in the country is diverse, with various ethnic and linguistic groups from Asia, Europe, and America. The estimated migration happening to KSA per day is 237. In 2020, the General Authority for Statistics reported a drop in numbers and forecasted that Saudi Arabia would shed 1.2 million expats over the year. The authorities canvassed the labour force across the kingdom, resulting in 81,900 more Saudis in the workplace. The sharp decline in expat numbers is part of a drive to boost citizens’ employment, which is called Saudization or Nitaqat. This has been implemented across the Gulf with countries such as Oman, Kuwait and Bahrain reporting a sharp decline in expat numbers.

Have a look at the approximate expatriate population in the KSA according to nationality.

While looking at Saudi population by nationality in 2021, you can notice that the ethnic composition is 90% Arab and 10% Afro-Asian. There is also a significant number of Asian expats. 80% of Saudis reside in the 10 urban areas – Riyadh, Jeddah, Mecca, Medina, Khobar, Hofuf, Yanbu, Ta’if, Dhahran, and Dammam. Saudi Arabia has a unique position within the GCC countries as almost two-thirds of the population is made up of nationals, unlike the other countries where the citizens are the minority.

(In the coming weeks we will be exploring Saudi Arabia’s 2021 population in detail, from the perspective of the various factors and demographics that it’s made up of.)

Meanwhile, you can read our 2019 blog examining the elements of last year’s population figures.

The current population was estimated by considering the population growth rates in major cities as well as other factors influencing population, like birth, immigration and mortality rates. Several authentic sources like World Bank, United Nations, WorldoMeters.info, WorldPopulationReview.com and PopulationPyramid.net have estimated the population of several countries including Saudi Arabia until 2050.

Saudi women now play a much more active role in society. The country has given women voting rights and they are being encouraged to play a more inclusive role in society. More and more women are joining the workforce as the government looks to diversify the economy. Women are now allowed to possess and drive cars in the country as per a royal decree issued in June 2018.

Population of Saudi Arabia Over the Years 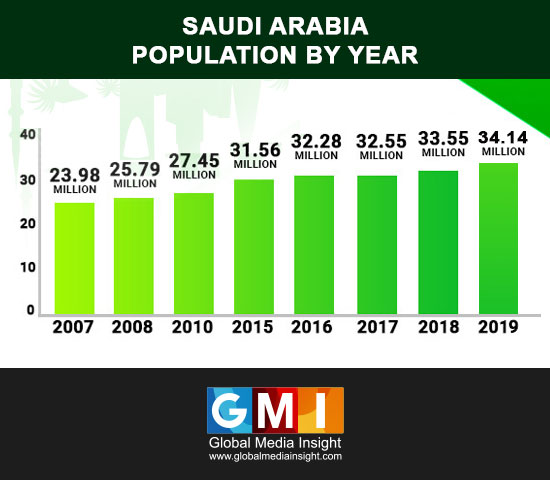 With the discovery of the two largest oil fields ever discovered in the world, Saudi Arabia has gone through a massive population boom. The country is a large market for employment in foam, insulation and plastics, as well as chemicals that go into adhesives, coatings and cosmetics.

The population boom has been particularly evident in the last decade with the population increasing by nearly 2 million between 2007 and 2008 as well as between 2008 and 2010. From just 23.98 million in 2007, Saudi Arabia has now grown rapidly to exceed 34.14 million. The diversification of the economy driven by the new generation of the Saudi family has made the country into a haven for migrant workers.

The cities of the Kingdom of Saudi Arabia (Saudi Arabia) are centers of industry and culture. The capital, Riyadh is the biggest city with a population of 4.21 million. Almost all the companies that operate within the Saudi borders are headquartered in Riyadh. Several large plastic and metal factories are located in and around the city. These factories along with government-owned petrol company Aramco?s Riyadh Refineries are the biggest sources of employment in the city. Situated at the center of the Arabian Peninsula, Riyadh is truly at the heart of the Arab world. 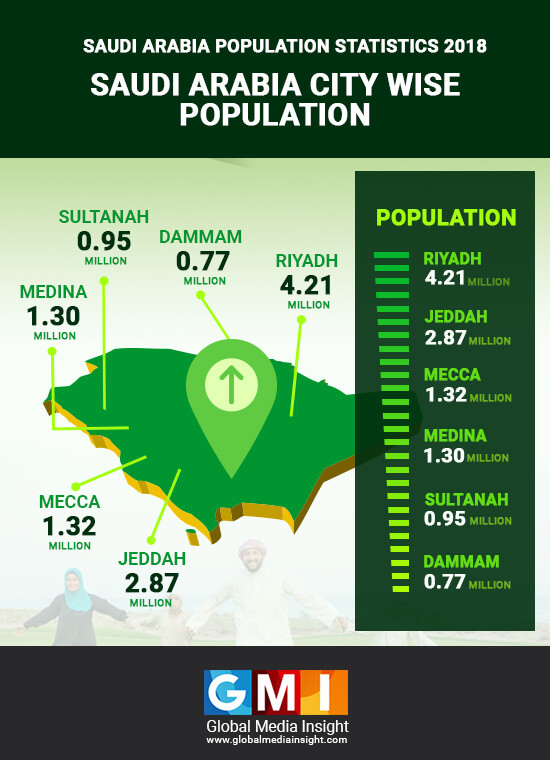 The second biggest city in Saudi Arabia is Jeddah, the gateway to Mecca and Medinah – ?Islam?s holy cities. With a population of 2.87 million, Jeddah is the commercial capital of Saudi Arabia as well as the biggest port along the Red Sea. The city is also a very important tourist destination, playing host to thousands of tourists every year. Several industries like mining and glass manufacturing are located in and around Jeddah. The third most populated city in the Saudi Arabia is the holy city of Mecca with a population of 1.32 million while Medina with 1.30 million people is third. The city of Sultanah in Al Madina district with a population of 0.95 million is fourth and Dammam is fifth with 0.77 million people.

Expatriate Population of Saudi Arabia (Data as of 2017-18) 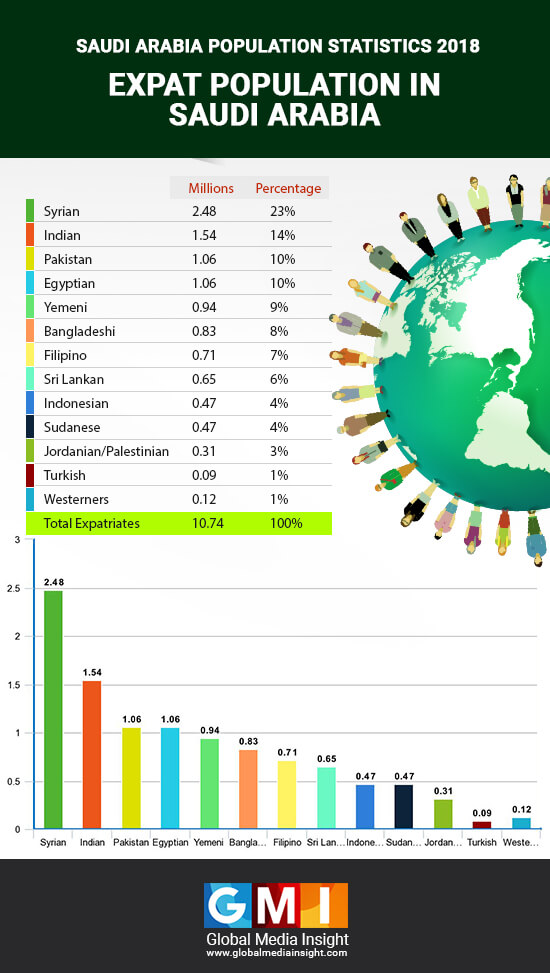 As per the data from 2017-2018, more than 30% of the Saudi population are expats. The total number of non-Saudis in the country is estimated to be 10,736,293. Nearly a quarter of this are Syrians fleeing the war in their country. Almost 2.5 million Syrians live in Saudi Arabia and they are given free access to education and healthcare, as well as encouraged to take up jobs in the country.

Unsurprisingly, Indians are the second most numerous diaspora in the country. There are 1.54 million Indians in Saudi Arabia with most of them employed in the hospitality and mining industries. Saudi Arabia is also the largest market for unskilled Pakistani workers. The country hosts nearly 1.06 million Pakistanis, most of them working in unskilled sectors like construction.

A large percentage of the Saudi workforce is employed in the oil and mining industry. The kingdom is the world’s leading oil exporter, accounting for almost one-sixth of the world?s total oil export and the second largest producer. The country is undergoing a rapid socio-economic transformation that is spearheaded by the Saudi family.

Ever since his ascension in 2005 King Abdullah has been championing the modernisation of Saudi government. The House of Saudi has been ringing in the changes after Mohammed bin Salman took over as the new crown prince in June 2017. He is the first leader of Saudi Arabia from the Millennial generation, regarded by many as responsible for the modernisation of Saudi values with women given driving rights for the first time and increasingly encouraged to have an improved standing in society.

The country’s theaters now show cinemas, for the first time since 1965, and the government has also started issuing new tourist visas, besides the Haj visa that is reserved for Muslims. Nowhere has the digitisation been more evident than in the field of social media. Over 30 million Saudi Arabians use social media on a daily basis and nearly 18 million of them are mobile social media users. With the increased involvement of women at the workplace, the modernisation of Saudi Arabia is expected to gather pace.

To get your brand?s message to your clients in Saudi Arabia or abroad get in touch with Global Media Insight today. We have over 19 years of experience in digital technologies and social media and digital markets along with expertise on the latest tools to drive engagement to increase your business?s brand value and customer loyalty. Talk to us to discover social media strategies that work across platforms and channels.