Posted by GMI Blogger Posted in Infographics,Social Media Marketing
October 4th, 2021 at 02:15am

For sharing videos or advertising, there exists no other platform as rewarding as YouTube on the planet now. There has never been a website in the past decade that gives us opportunities to become popular overnight and make money online by just uploading videos.

Here’s an infographic narrating the overall user statistics, mobile user statistics and user demographics of YouTube to help you make an intelligent decision.

YouTube has been a part of our lives since 2005, entertaining us with videos, ranging from web series to news, product reviews, music, movies, how-to videos, unboxing and vlogs, uploaded by individuals and organizations from various corners of the world.

In the year 2006, Google bought it from its founding fathers, Jawed Karim, Steve Chen and Chad Hurley for a whopping $1.65 billion.

Now, a decade and a half later, with 2billion users, this video sharing site is the second-most-visited website after Google and holds a second position in Alexa’s global ranking of websites.

YouTube – The Second Most Popular Social Media Platform in 2021

Check out the list of social platforms popular in 2021.

Daily active users means the number of YouTube users on any given day. These figures help us know how many people access YouTube daily as part of their routine.

Monthly active users means the number of YouTube users in a given month. Since only the logged-in users are counted, the actual figures can be higher.

Today, YouTube has taken the center stage as the main personal entertainment medium. YouTube users have been increasing by leaps and bounds since its launch, for reasons known and unknown. However, simply put, variety is the spice of life for consumers and YouTube rightly provides that. Take a look at the year-on-year YouTube user growth.

User engagement on YouTube is reportedly high when compared to other websites like Facebook, Twitter and video streaming sites like Netflix. YouTube users consume over 1billion hours of videos daily, which roughly equates to 5billion videos. According to estimates, a user sticks to the platform for about 11mins and 24 sec on average.

Looking at the frequency and volume of uploads, over 500 hours of video uploads happen every single minute on YouTube. This makes the platform a warehouse of videos with more than 5 billion videos shared so far. Every single visit that happens on YouTube is counted as 6.95 page views approximately.

YouTube is quite democratic in the sense that it offers its visitors the freedom to express their ‘likes’ and ‘dislikes’ for videos uploaded. The video that has garnered the most number of ‘likes’ so far is “Despacito” while “YouTube Rewind 2018: Everyone Controls Rewind” bags the credit of being the most-disliked video ever on the platform.

By the way, “Me at the zoo” was the first video that appeared on YouTube and it was uploaded on 23 April 2005.

Considering the gender of the users, YouTube is more popular with men than women. Male users amount to 62% of the YouTube viewing population, while female users account for only 38% of visitors.

According to the US internet population statistics, the 18-25 year age category makes up the largest visitor base of YouTube with 81%, followed by 26-35 years with 71%. 36-45 and 46-55 age groups come in third and fourth positions with 67% and 66% users respectively. The last place being given to the 56 year and upwards category with 58% visitors.

With local versions available in over 91 countries and 80 different language options to choose from, YouTube is the number one video-sharing platform in the world with more than 95% of the internet population using it.

We saw the different stats of YouTube users across the world. Now, while looking at the number of YouTube users by country, it is evident that India tops the list. In India, around 225 million users are active on YouTube every hour, according to 2021 statistics.

While looking at the top-performing countries, you can easily identify global diversity. All these countries saw a massive increase in users since 2013. Considering the gender of YouTube users, 56% of users in 2021 are males while females constitute only 44%.

According to 2021 YouTube statistics, Israel has the highest YouTube penetration with almost 93% of the population using the platform.

YouTube has become one of the most favorite platforms for watching interesting videos on the go. Almost every mobile phone (and browser) has got a YouTube application to keep their users engaged. Today, more than 70% of users access YouTube on their mobile devices. This is facilitated by the YouTube app, which, as of Dec 2018, has been installed on over 5 billion Android devices. 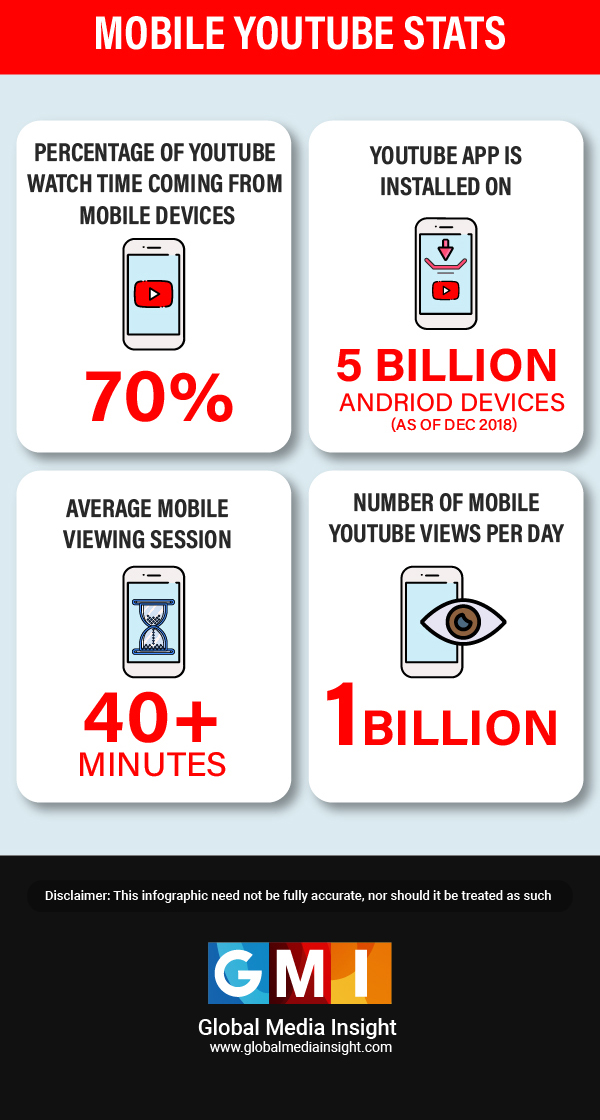 YouTube offers a share of its advertising revenue to its content creators (or YouTubers). There are hundreds of thousands of professional YouTubers today, earning a decent income from their channels. Here, we look at the top ten highest-grossing YouTube channels of 2020. (2021 data is not available, we will update it as soon as we get it).

There are hundreds of thousands of YouTube channels created by both individuals and brands. Based on their subscriber following, the channel that comes first is T-Series (130mn). Pewdiepie secures the second place with 103mn subscribers, followed by Cocomelon with 74.1mn subscribers. Set India takes the fourth position amassing 65.9mn subscribers and 5-Minute Crafts, the fifth with 64.7mn subscribers. 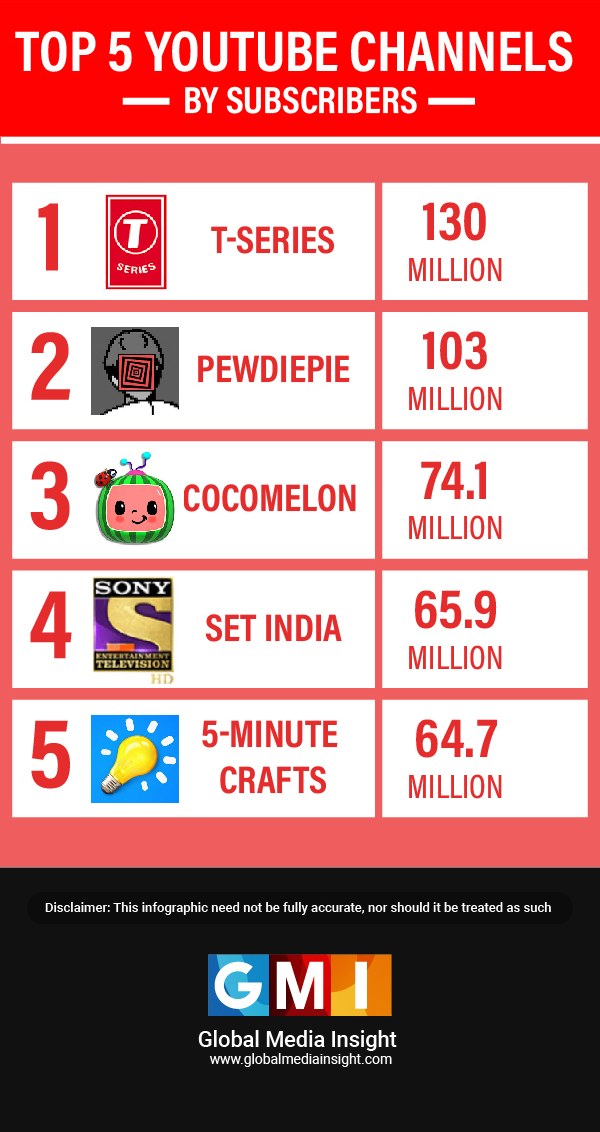 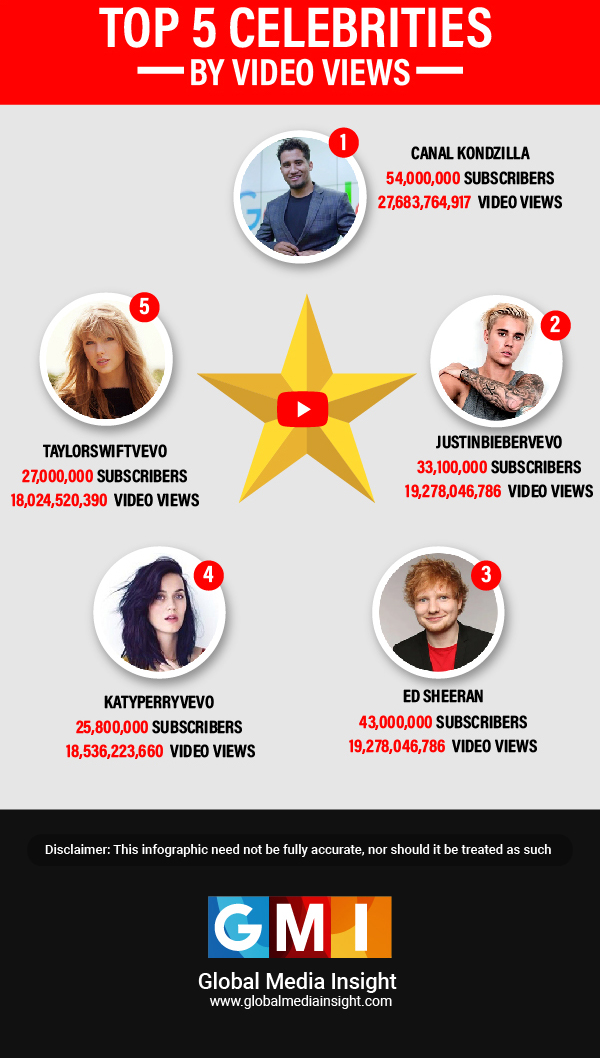 Now, coming back to the question…should you be using YouTube to market your business? Of course, it’s an emphatic yes! When studies say that 95% of internet users watch YouTube, you’re missing out on incredible opportunities if you don’t include video marketing in your digital marketing mix.

Recent research also reveals that YouTube has compelled 6 out of 10 people to give up TV shows, it’s time to jump on the YouTube wagon. Build your video marketing strategy with us. Video production and YouTube advertising are two of our fortes and we’ve been offering these niche services ever since we discovered their enormous potential for business growth. As a digital marketing agency operating in Dubai for more than 20 years, we can assure you YouTube can help propel your brand to the next level. Call us today and we’ll help you get started.